The Lynx FDC Project and issues

The Lynx FDC Project and issues

I decided to start a new thread rather than derail Pete's.

Not really; but to make a long story short:

- I've built a Lynx DOS proto based on Frank Rasmussen design (I assume it works, he has pictured his own working setup)
- Both PCBs (interface & controller) seems to work, XROM loads the Disk ROM as expected and the Lynx still works

- Seems that I can format a floppy, I can hear the stepper motor moving the heads along all the expected tracks.
- ...but when the floppy is going to be verified, it always fails. IIRC, the floppy was indeed erased so seems that there's some problem when reading.

I've checked both floppy drive types: 5.25" and 3.5" (funny that when a 3." drive is used, it writes 80 tracks instead the usual 40). I've also checked all the ICs and all seems to be good working ones, the FDC also seems good, checked both 1793 and 8877 models. My only guess is there's some kind of FDC calibration problem that I'm not able to correct...or maybe my Lynx has a strange problem and need to test my LynxDOS with another machine

Here is what I find interesting.

I never planed to use real 5.25 floppy disks. I have an HxC floppy disk emulator that is much simpler. Also the Lynx floppy drives have a hard wired 220V power supply that is heavy, and even though I have a 220V step up transformer, its a lot of spaghetti. That said:

I did check to see if the floppy drives worked. I formatted a blank disk. The drive stepped through the tracks, then the head returned to track 0, and Lynx DOS reported an error. I figured the drives were probably bad, removed the FDC board, and connected it to the HxC.

The Lynx will not format a HxC/HFE disk. Again I hear the unit "stepping", it completes, goes to verify, and reports the disk is bad. I just assumed the LDF implementation was iffy and just recycled old LDF images by deleting the files and starting over. That works.

But I never connected these two events until jltursan reported the problem with his Lynx DOS/FDC design.

Also, the Lynx will NOT write anything to the HFE disk unless I force pin 34 low (short it). The HxC device works fine with the Amiga, ST and an old XT, so I think the HxC is fine. The Lynx FDC just seems supper fussy on the RDY line.

So having said all of that - jltursan - have you tried using your DOS/FDC with an HxC or Gotek and seeing if it will read? is there just something really wierd about the Lynx DOS/FDC implementation? Has anyone got a working Lynx disk drive that can reliably format?
Arriba

Thanks for opening the thread!

Never tried with a Gotek (so the Lynx does work with the FlashFloppy firmware?) or HxC. I have some them and I can check if they work; but I don't expect any miracles. The only thing that amazes me is that your setup is the original one and seems to behave the same. Maybe there's something special with the some drives to make them compatible with this FDC.

The owner of the elborg.dk site has this drive cabinet:

I'll start again from the basement and double-check both PCB schematics against the originals from Pete. I've also checked all ICs, most of the passive components, cables and known working drives and floppies; so if Pete has built some new FDC controllers maybe can point us something more...
Arriba

I will drag out some kit and remind myself, the only thing off top of my head is that the lynx uses the 'wrong' side of the disk compared
to other setups... I think, I will check.
Arriba

I have my set up on the bench here,

Using an HxC with a homebuilt FDC controller I tried to format a previously saved image on the SDCard.

The format operation continued until the HxC tried to read the 41st track at which point LynxDOS bombed out with a B4 format fail error.

I can't remember if there's a switch to force format as 200k, will investigate.
Arriba

I'm just trying a previous 800K image reformat, I seem to remember the Lynx tries to seek across to get the max cylinders, it's possible the HxC isn't flagging that it has reached the end of the 200K image file.
Yes, the 800K image reformatted correctly.

I think the HxC side of things is an HxC problem, possibly unrelated to your 'real disks' problem
Arriba

Here's a picture of my homebuilt FDC - missing a few chips this was probably before I finished it. I can see that there are a range of chip speeds used.

In particular IC6 is a straight 74 series

It's possible that IC6 needs to be straight 74, I can't think why else I didn't use an LS.
Arriba

Hey Pete, would you help us implement the disk controller for the Lynx on FPGA?

May be you know rampa069, he leads the team in some areas.
Arriba

yes if there's anything I can do to help. Yes I got in contact with rampa last year I think it was.

There's probably an open source core for the 1793

If not, the code in Pale emulates the essential features of the FDC and could be converted into fpga.

Here is a picture of my homebuilt FDC

I notice that IC6 and IC7 are both 74 series, non-LS
Arriba

Thank you very much pete!


which shows the port numbers - they're in the user manual too I think.

I have two ROMs for LynxDOS - version 1.0 which was released and ver 1.1 which I don't think ever left Camputers.


PS: I'd really like to use your ZXESP framework to make a better Lynx emu for the ESP. I stopped work on it because I was too lazy to write
the GUI side. You probably have a better idea of how to use the ESP32 memory than I do.

This is the first real pic I've seen of the original Lynx FDC, thanks!. Can't clearly see chips IC15, IC16 and IC9, which ones are they?

Btw, I've verified the disk interface schematic I have and seems fine. In your original I've found some oddities tho:

here is a picture of the DI:

On my Controller board:

The resistor combo on the READ DATA monostable at IC11 is 390R+ 2K7 measuring 2.95K in circuit

The resistor R1 in the /WE Pulse Width monostable (also IC11) is 4k7 as in the original schematic I posted (can you post a link to the ?XLS ?other schematic that maybe you got from Frank? - the dutch Lynx magician

Here are the port numbers for the disk and others:

(I hope he doesn't mind me linking to them - they could be helpful to someone.)
Arriba

Mike escribió:
(I hope he doesn't mind me linking to them - they could be helpful to someone.)

Don't mind at all

Attached are pictures of the Lynx FDC after I removed all the ICs from it. it might also help others trying to understand the circuit. 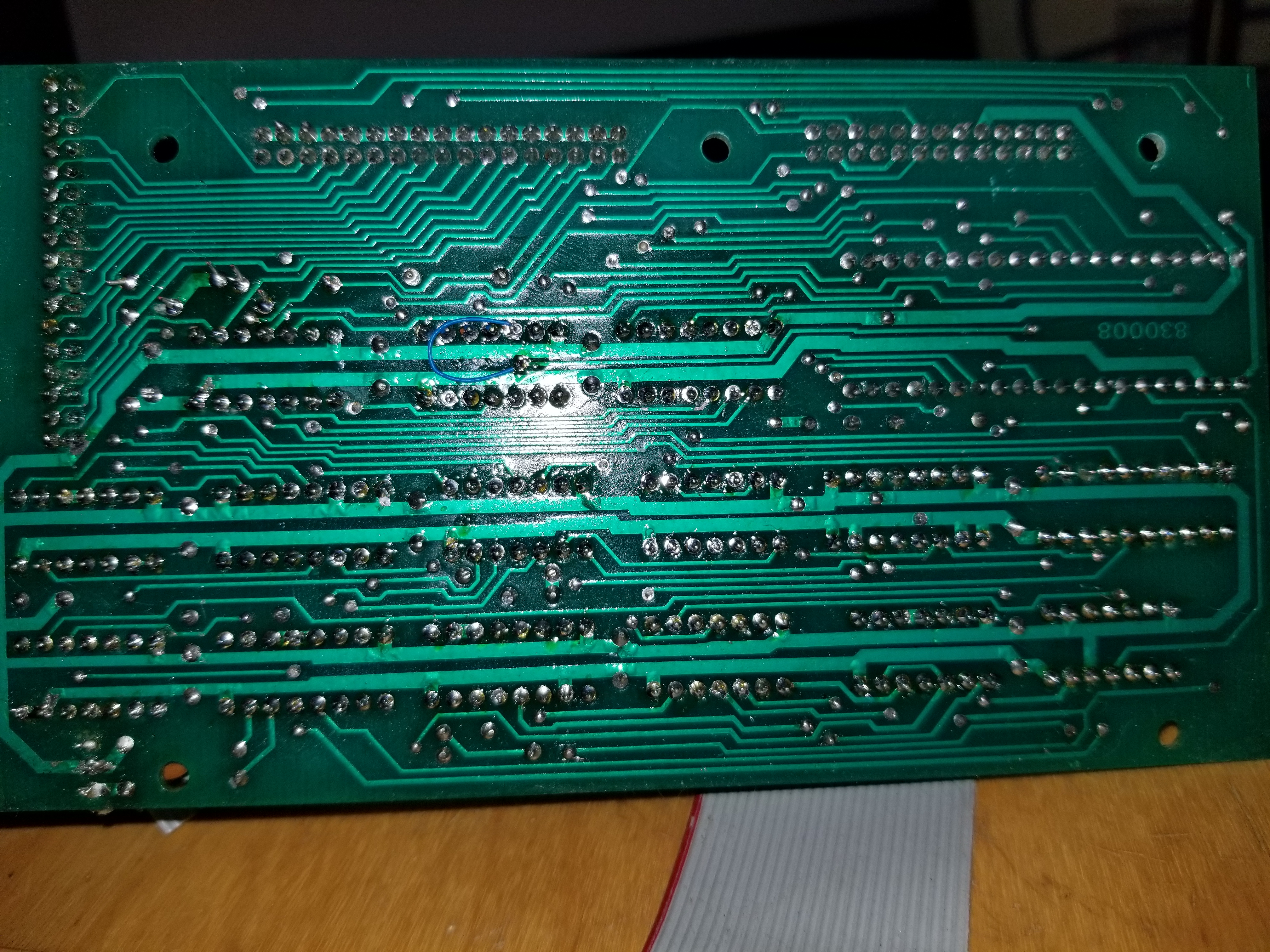 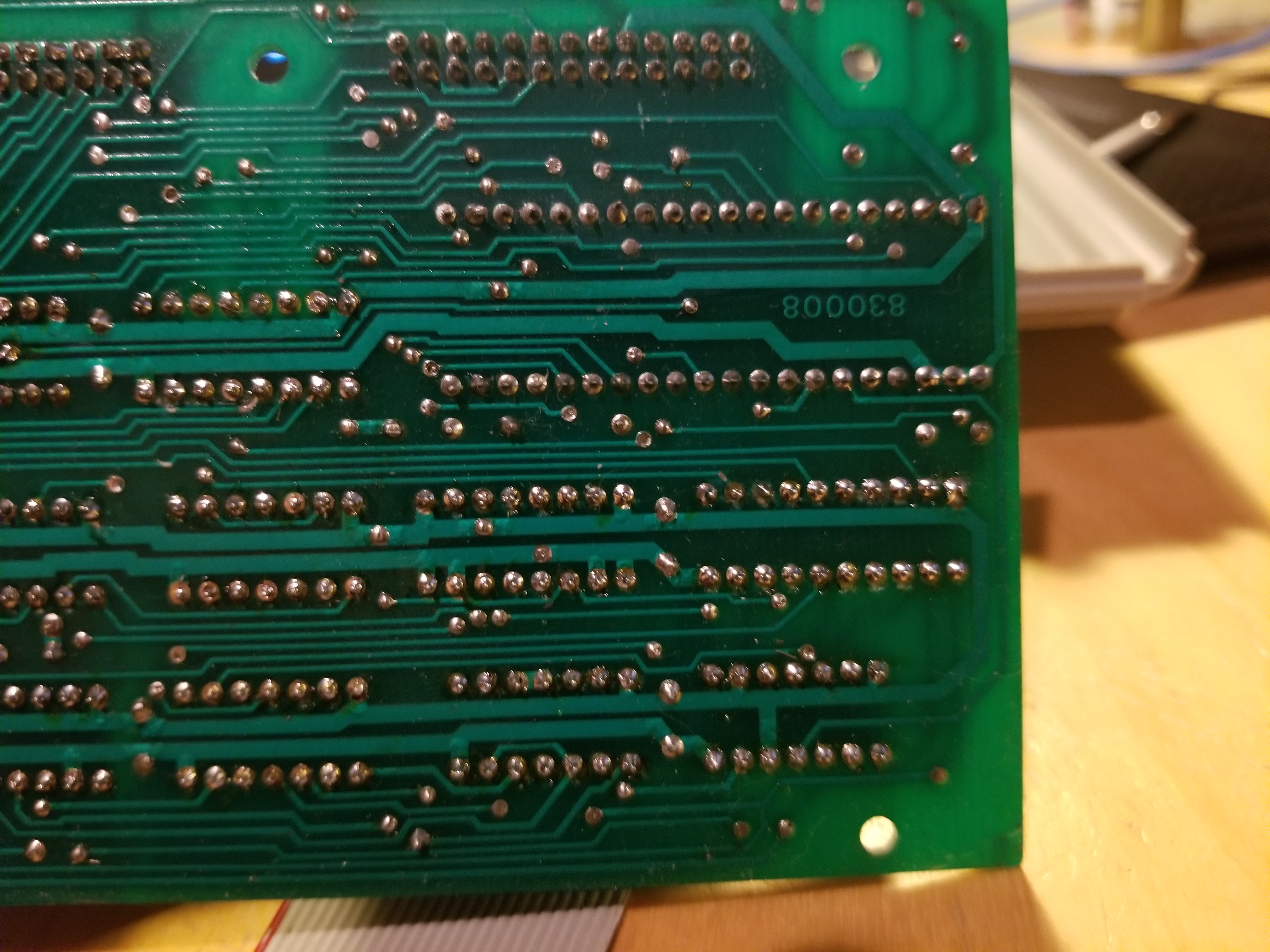 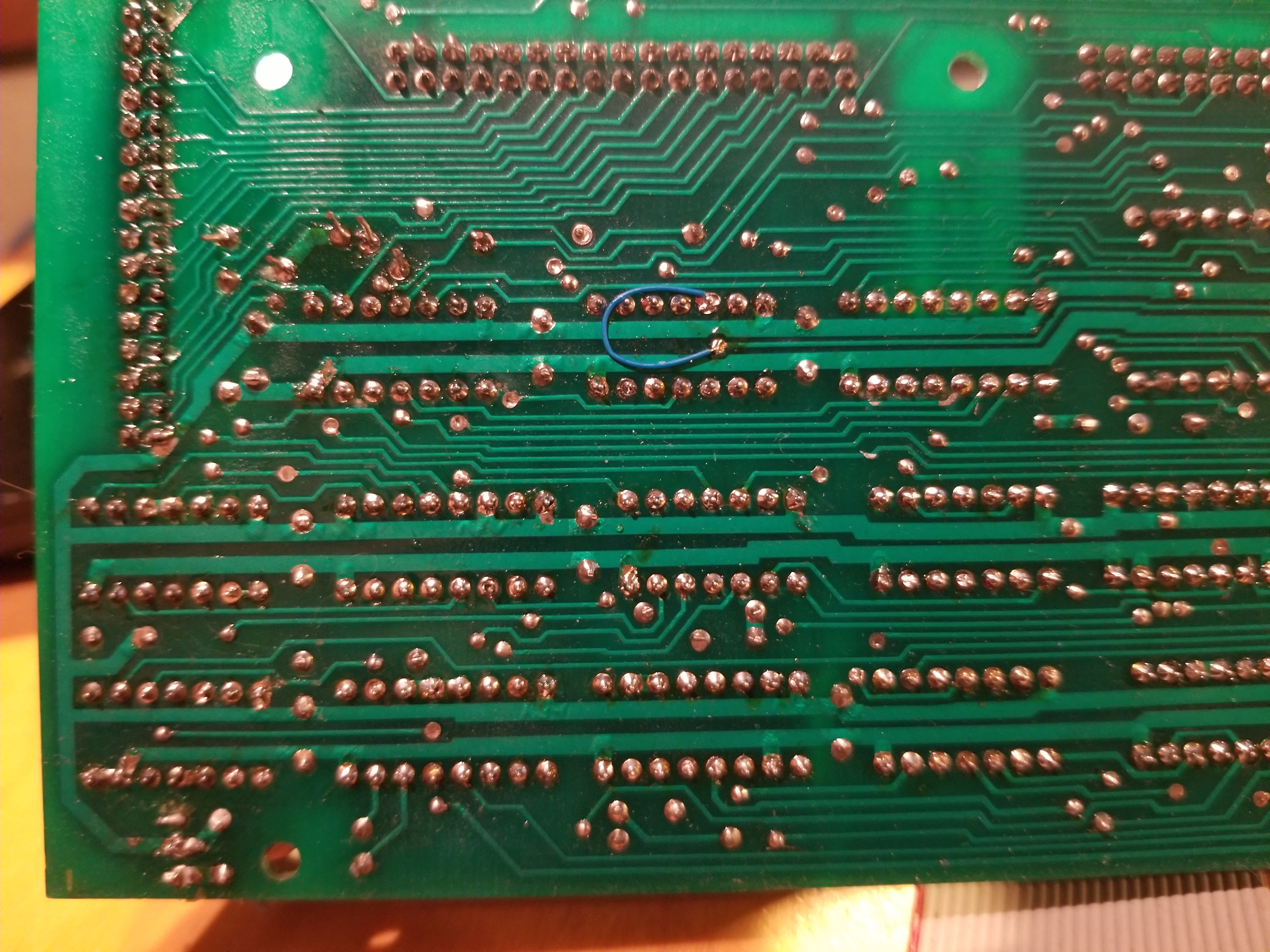 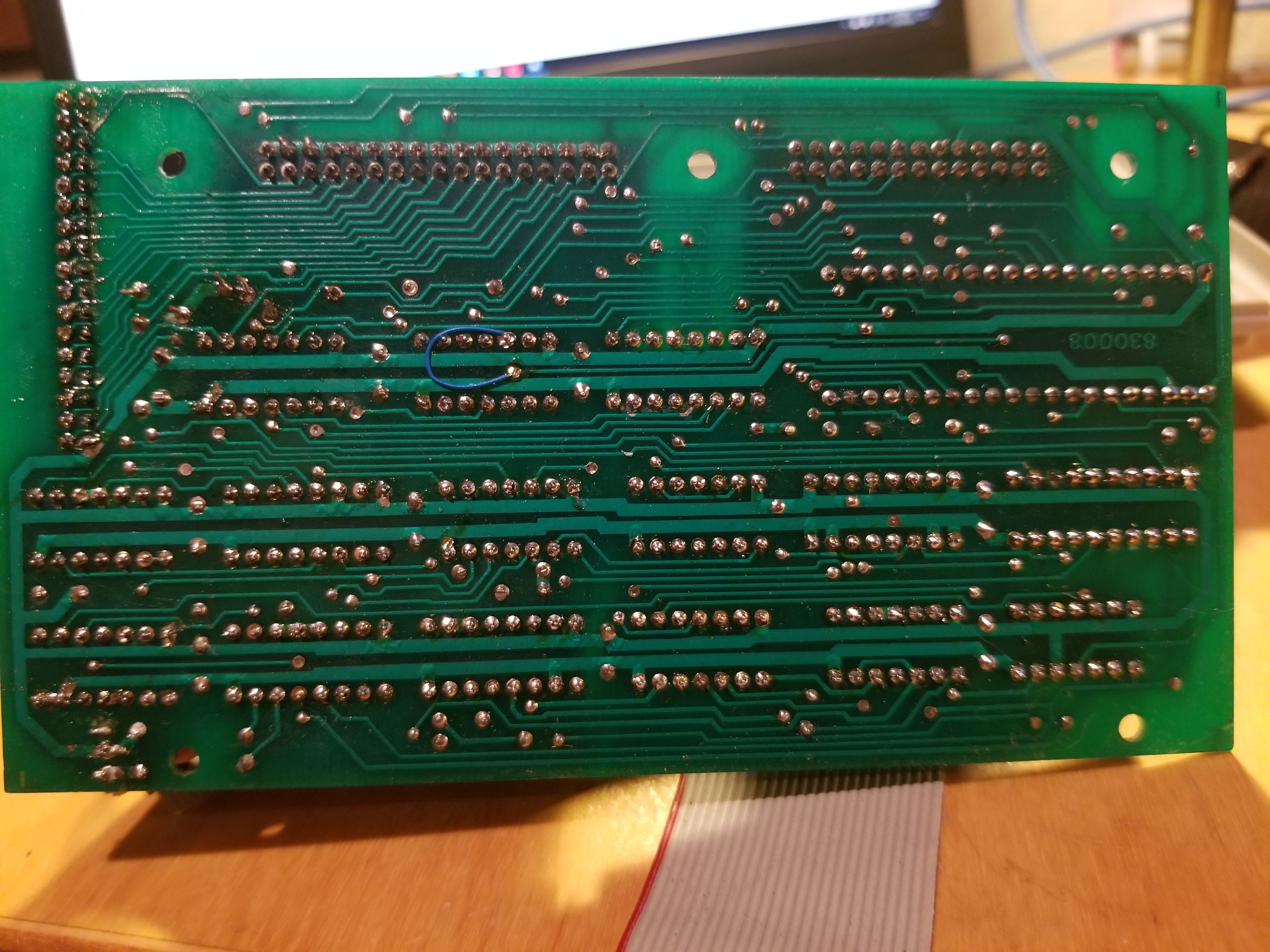 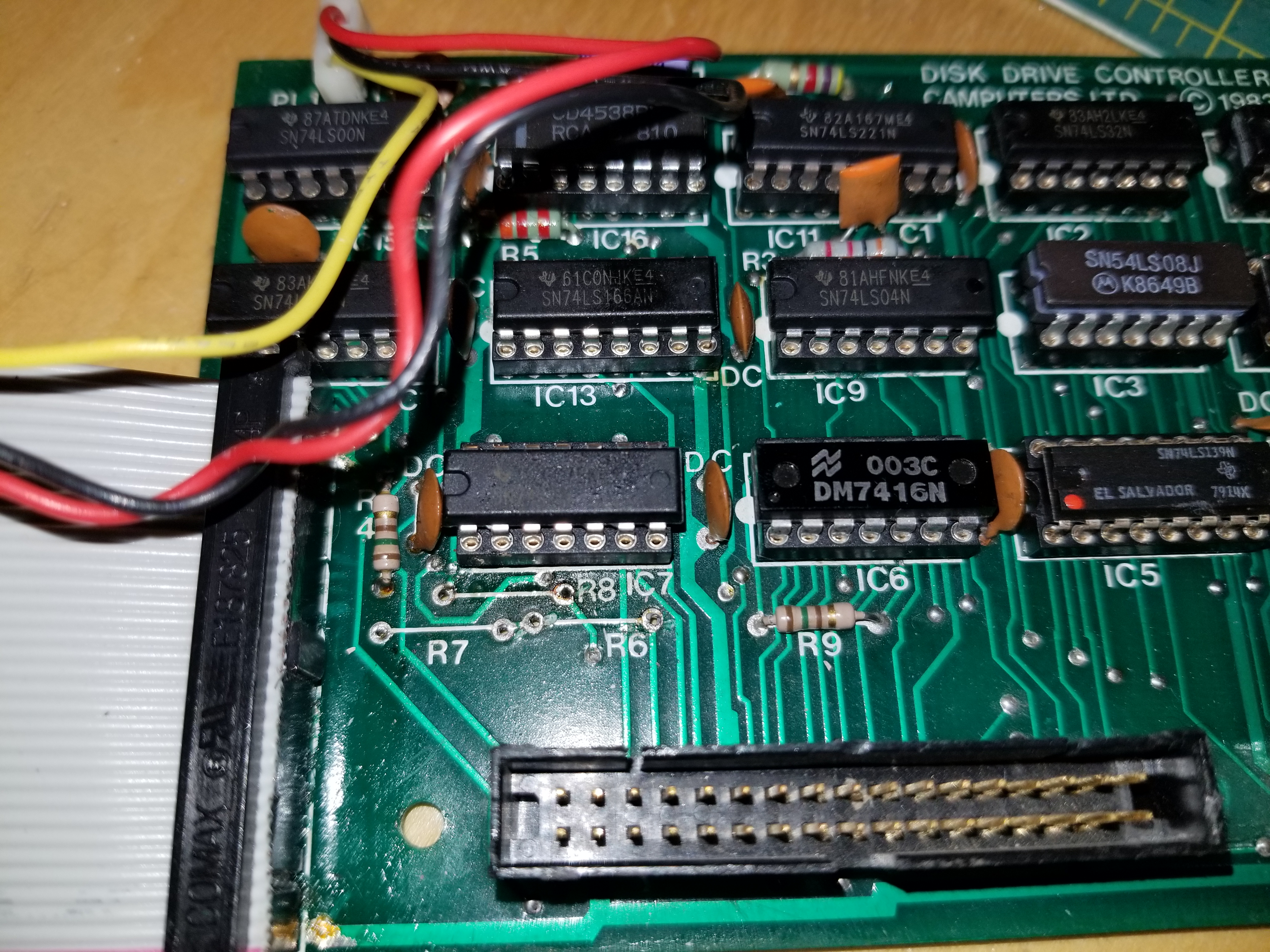 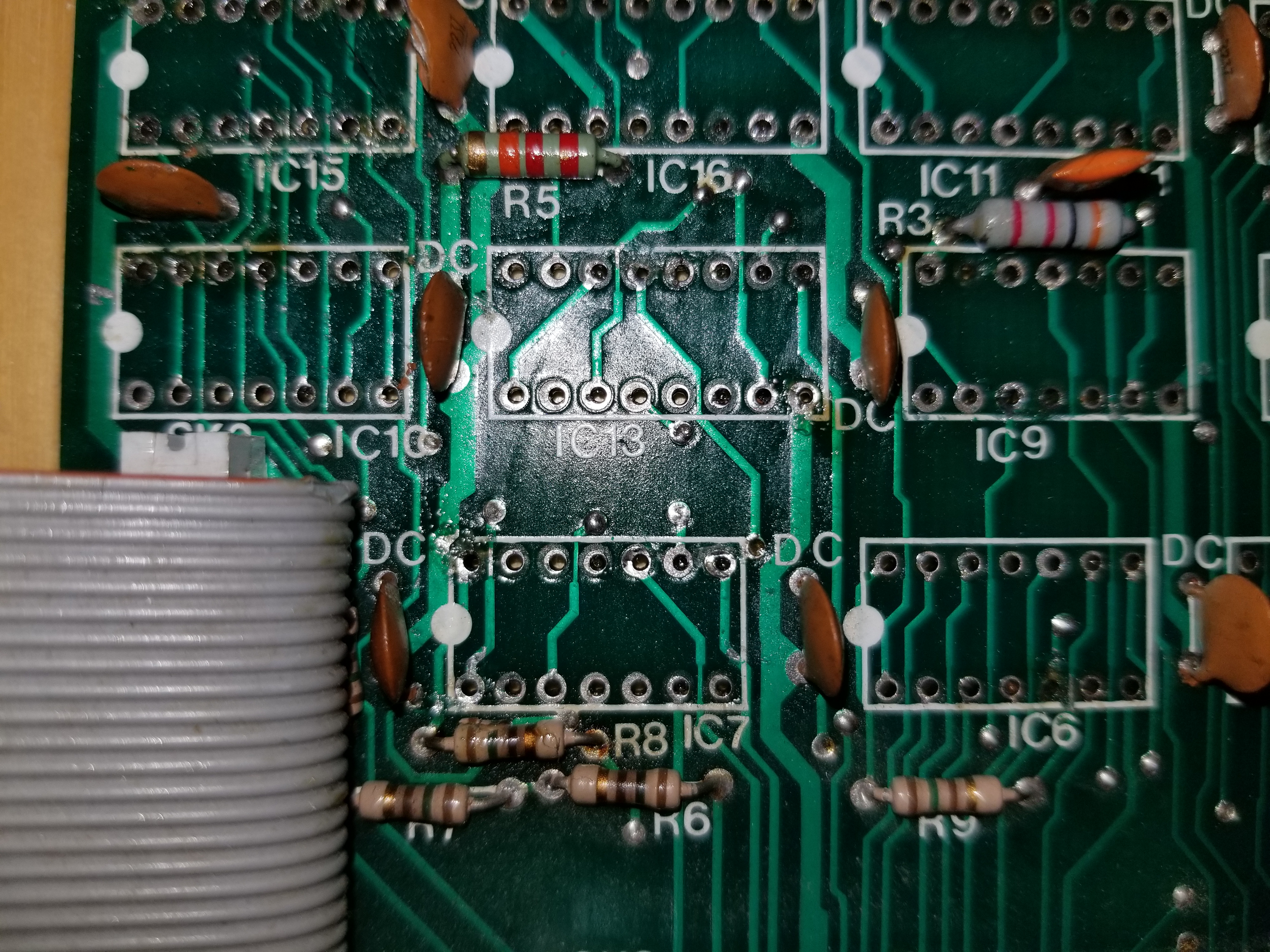 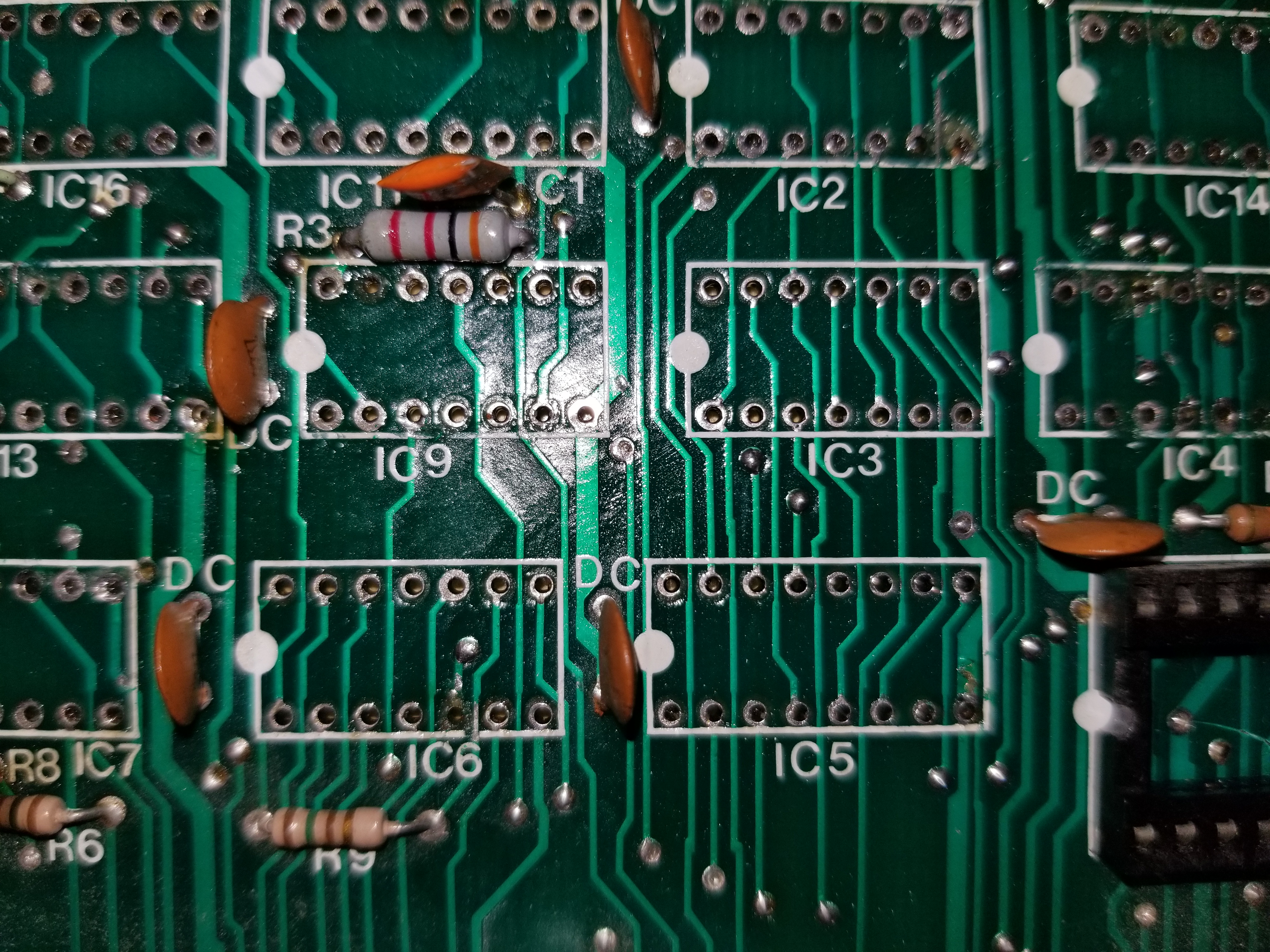 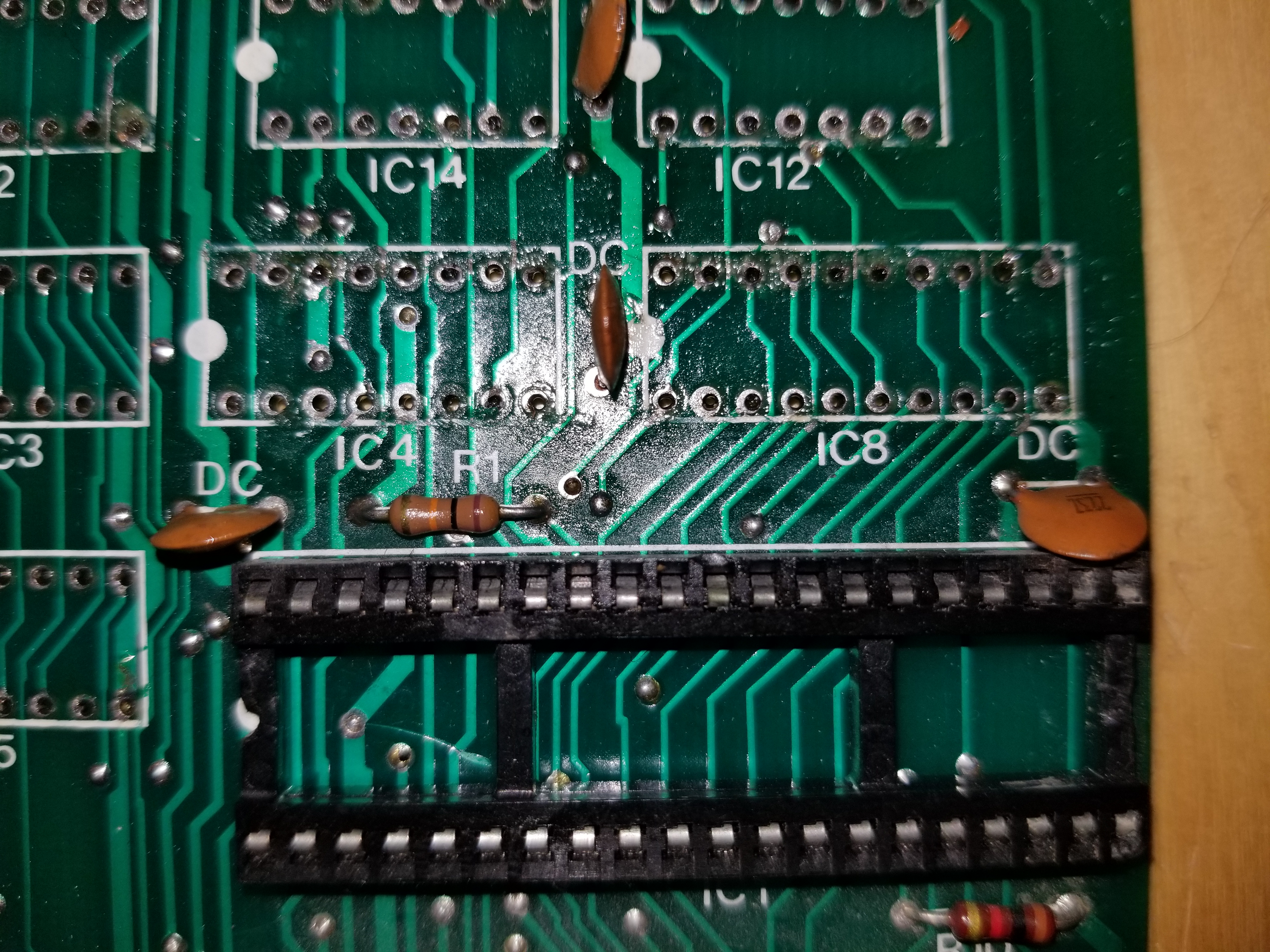 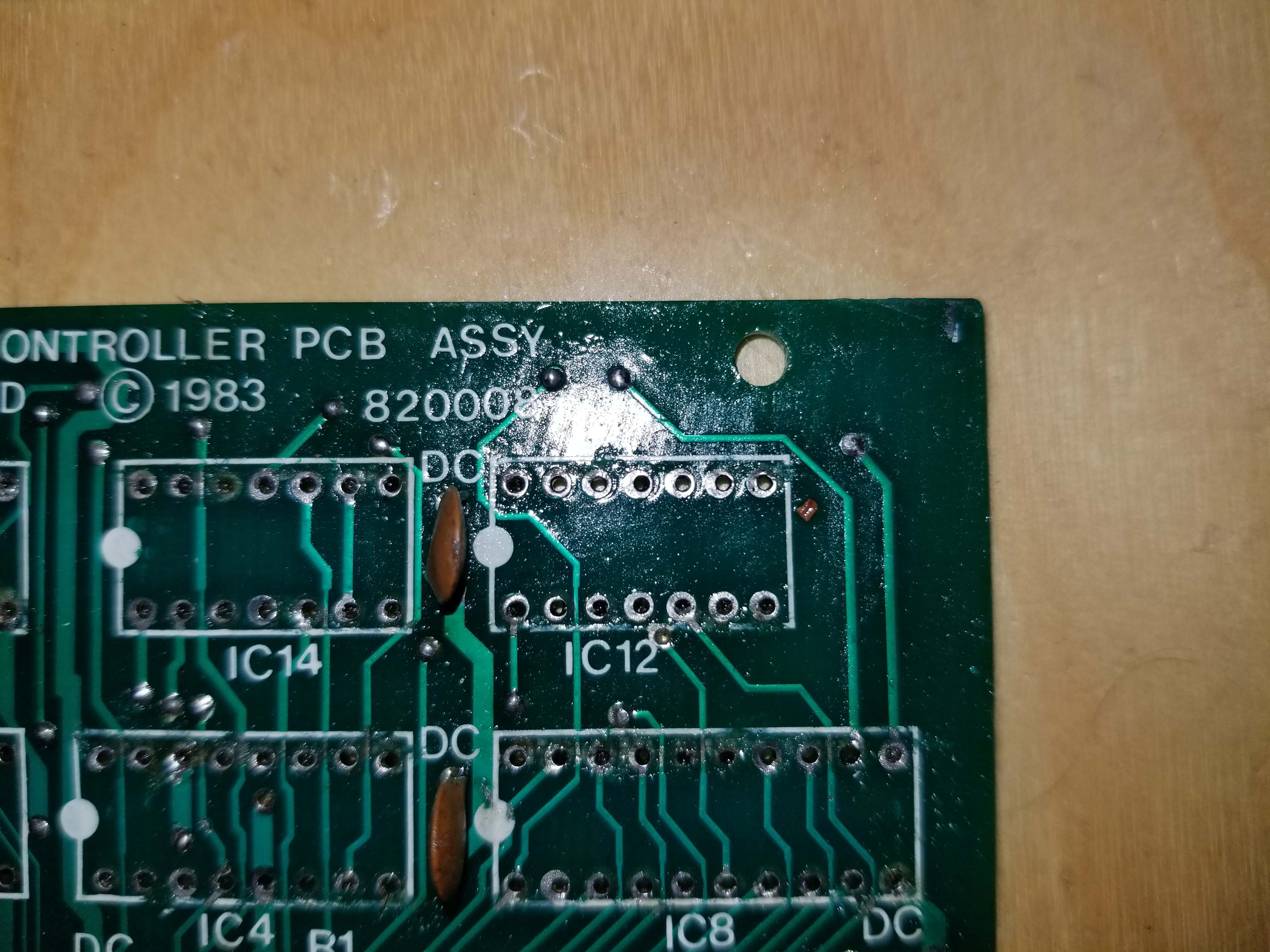 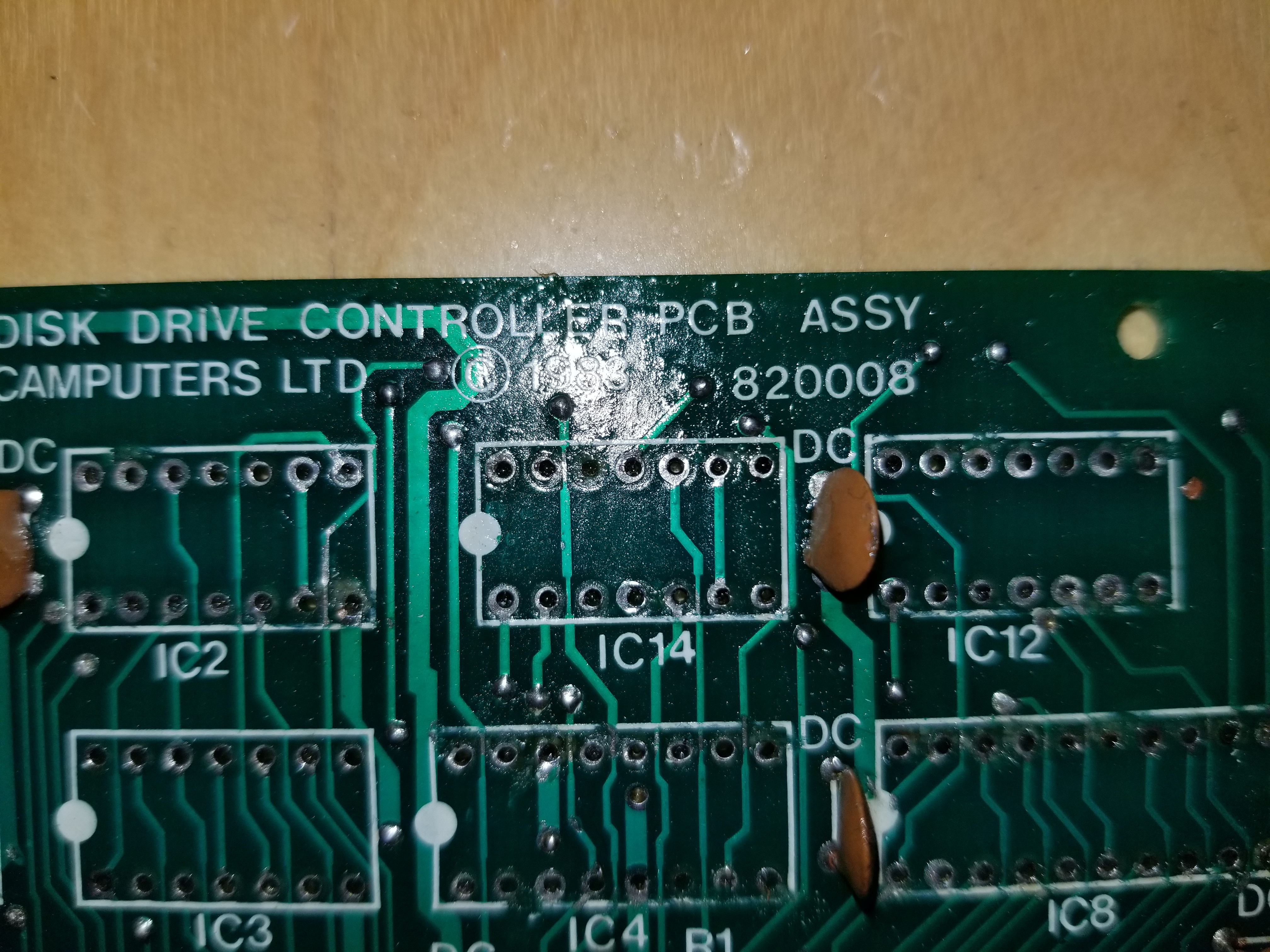 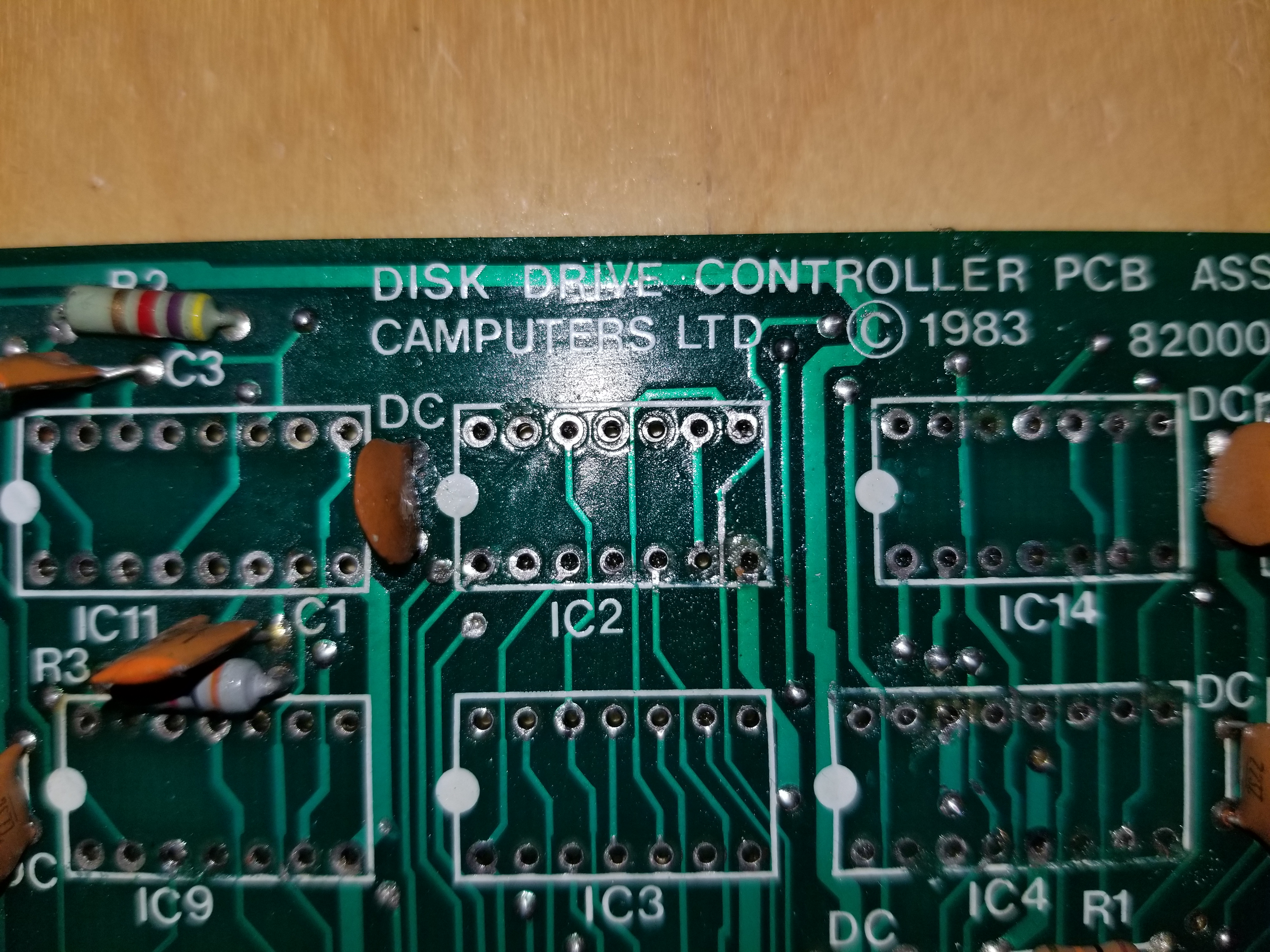 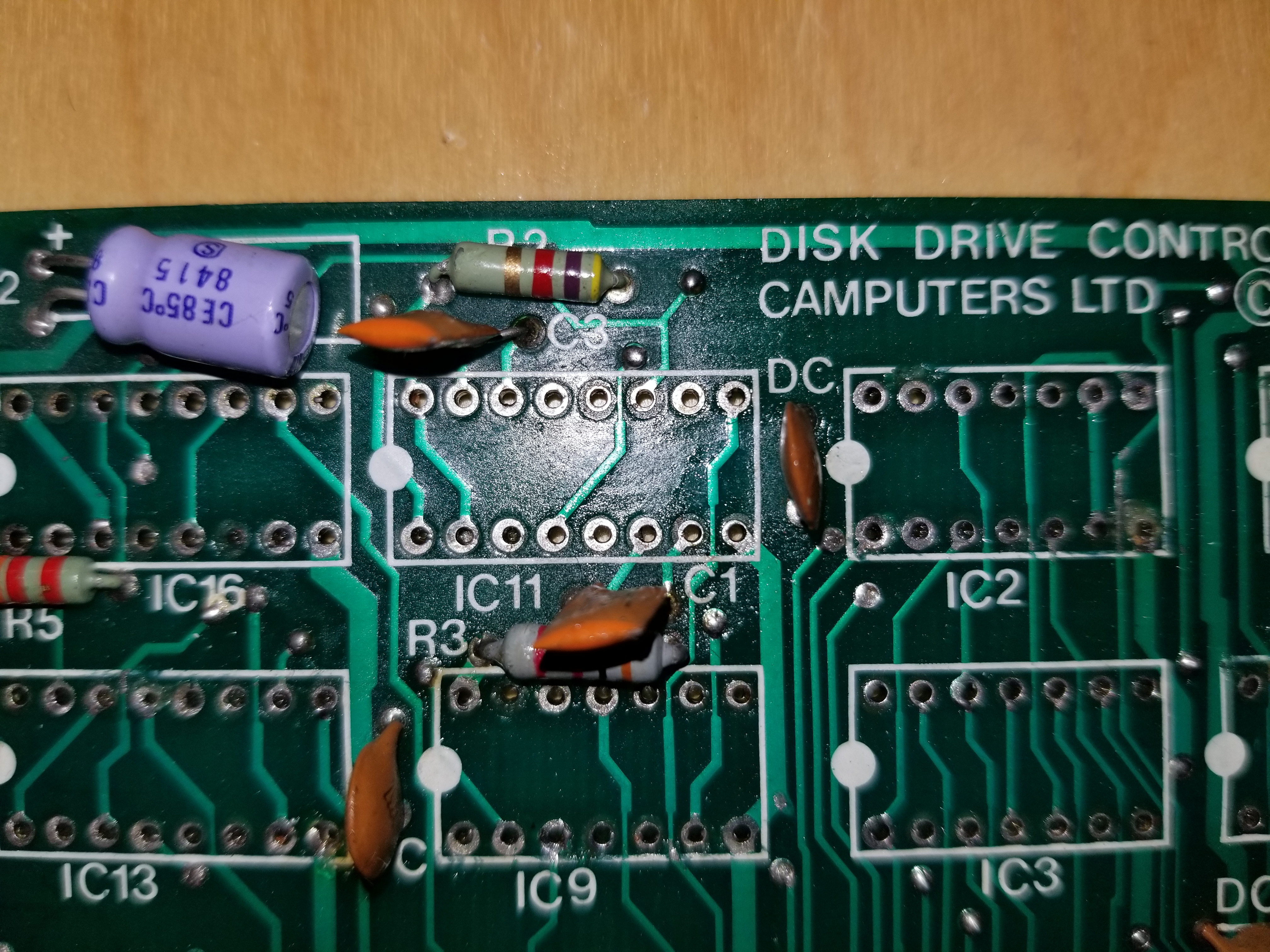 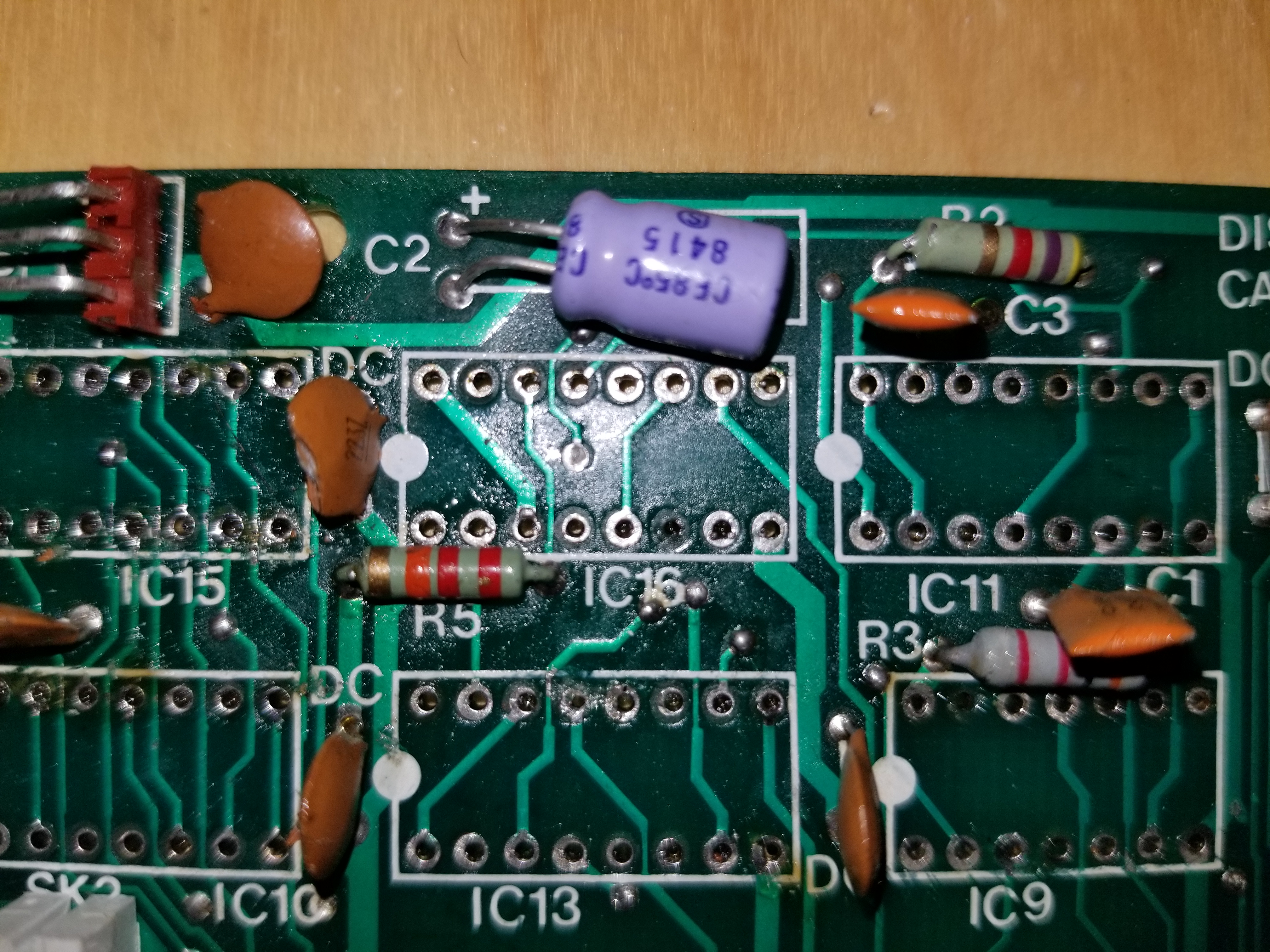 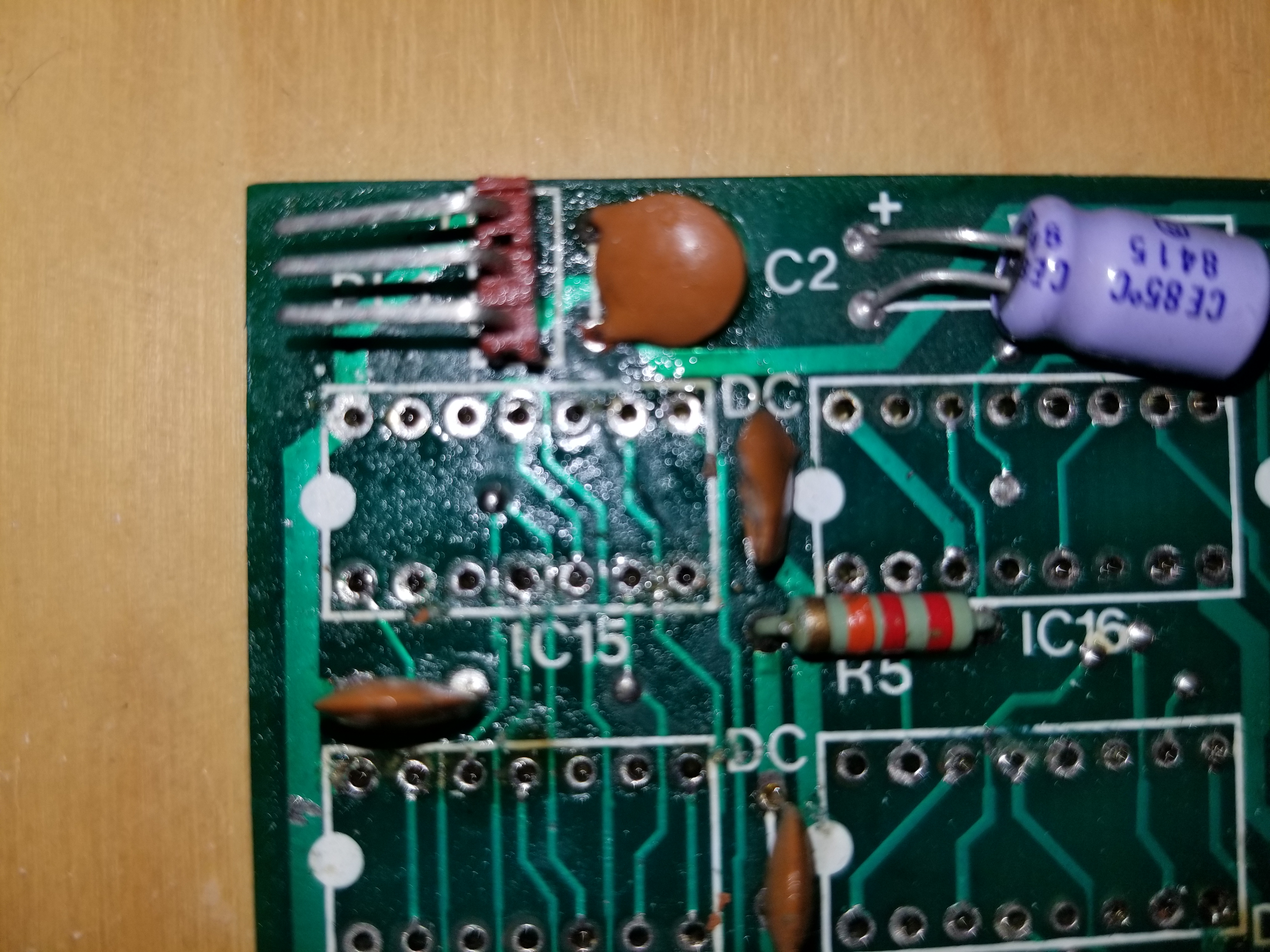 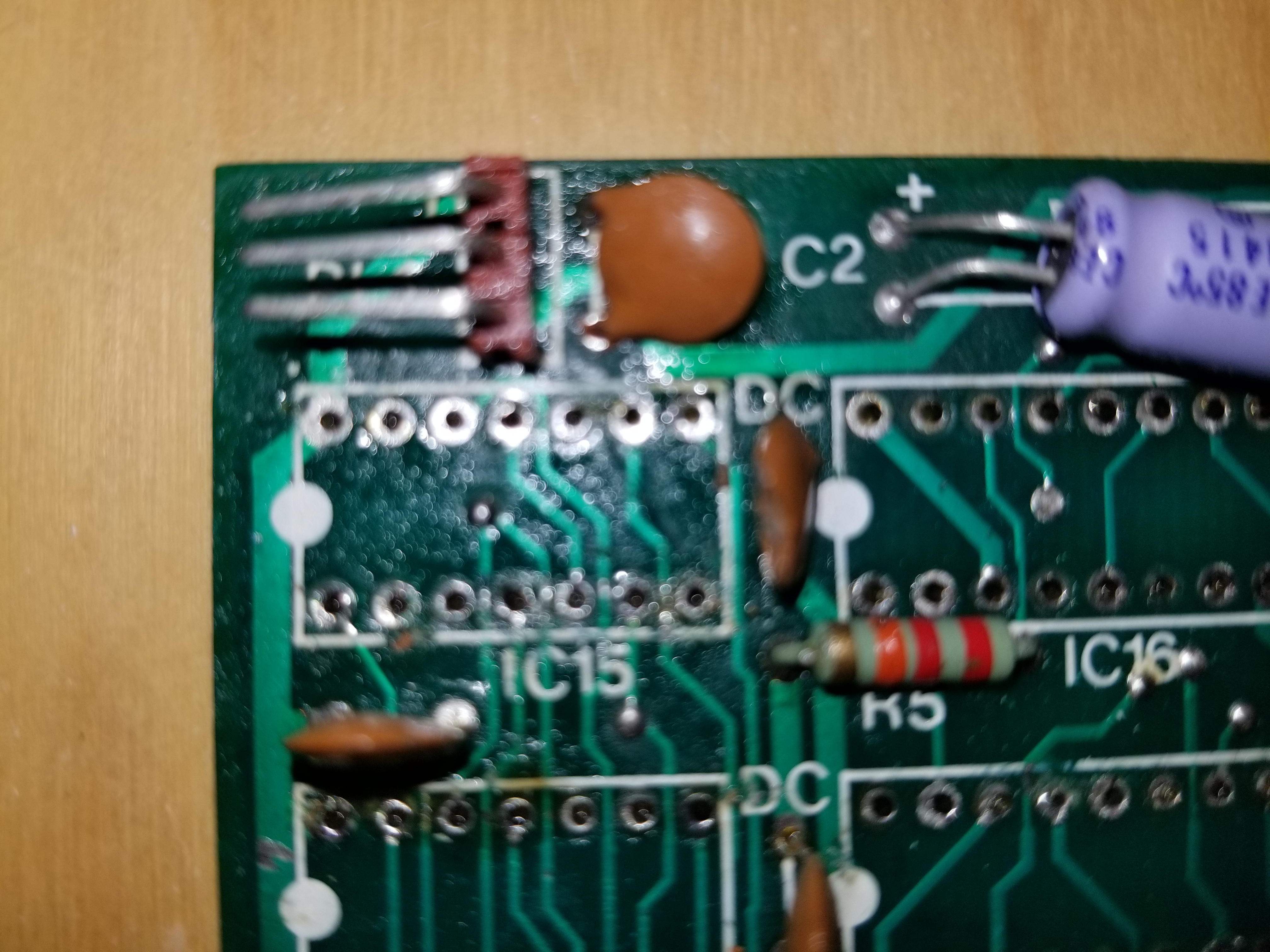 And why did I remove all the ICs you mask ask? Because I am an idiot, and managed to get the power plug reversed sending 12V around the 5V circuit. I can tell you that does the Lynx disk controller no good at all.
Arriba

How do you get your pics to come inline, the image tag doesn't seem to work for me? Are those images stored local to the site?
Arriba
Responder
60 mensajes